But for most paratransit riders — a group with much fewer affordable mobility options — driving your own personal vehicle may not be an option. As the world rebounds from the pandemic, cities and transit agencies can’t forget that paratransit needs a revolution of its own.

Despite the issues with these services, like needing to request rides two days in advance, unpredictable routes, and siloed operations, some cities and transportation agencies are finding ways to use familiar technology to make a change.

“There’s been a recent transformation happening within public transportation where more cities and transit agencies are exploring on-demand microtransit, and now we’re starting to see similar interest in the paratransit sector,” said Alex Lavoie, Global Head of Operations at Via. “Updating outdated paratransit has unfortunately not yet been a priority for many transit agencies. It needs a tech revolution.”

A number of cities and transit agencies have already applied microtransit technology to their outdated paratransit programs, and results are proving to be immensely promising. In hope of bringing more riders to public transportation and providing services tailored to their diverse needs, transit leaders in Green Bay decided to upgrade their previously underperforming paratransit network.

The new service allows riders to book in-app or through a web portal, getting real-time updates about vehicle locations and arrival times. They can also call a live dispatcher and receive trip statuses with automated calls and SMS. The technology deployed for GBM’s paratransit service was so successful that the agency decided to launch a microtransit option, GBM On-Demand, to replace underperforming fixed routes with convenient and affordable shared rides for all residents.

Notably, vehicle dispatchers and operators use a fully integrated backend system for both transit modes and, through fleet commingling, serve microtransit and paratransit trips with the same 12 vehicles. 2. Overhauling a massive network in Virginia.

Although Hampton Roads Transit (HRT) was already operating a robust paratransit service, local leadership was looking for new solutions to eliminate many of the most common complaints from customers: uncertain vehicle arrival times, long or circuitous routes, and lack of same-day scheduling flexibility, all while improving inefficiencies and reducing operational costs.

In order to overhaul operations, HRT invested in Via’s ADA-compliant technology, which optimized vehicle usage while providing riders with as much flexibility as possible, allowing for pre-scheduled trips with plans to gradually introduce riders to new on-demand trip planning technology. The vision: more efficient driver routing and dispatching will lead to both a better rider experience as well as higher vehicle utilization, resulting in lower operational costs. 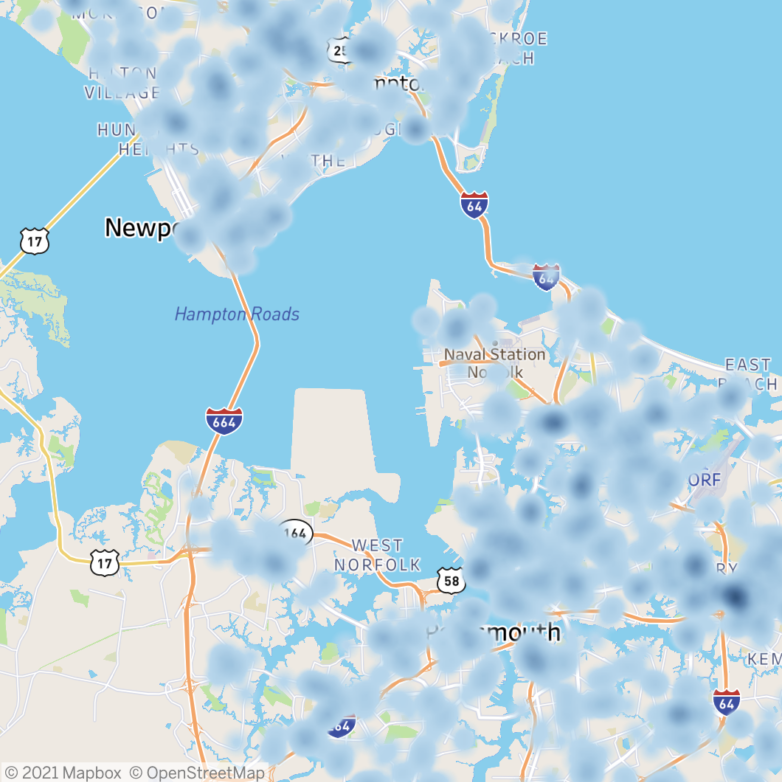 HRT’s transition to a technology-powered solution was not without challenges. The agency’s network covers almost 400 square miles across six cities, and is bisected by a large waterway that is crossed by only two bridges and a tunnel – all of which can be plagued by heavy traffic during rush hours. The area’s major employer, the U.S. Military, operates several bases within the service area, each with varying access and security requirements.

Beyond these operational challenges, HRT’s legacy paratransit service enjoyed strong ridership. Users knew their booking operator by name; they recognized the routes that took them to their weekly appointments. These comforts in the legacy service made the transition to a new operator a challenge. But, within two months of launch, the new service enjoyed lower call-in wait times, fewer late pickups, and an improved rider experience  — a strong testament to the adaptability of the new technology HRT began using to modernize its paratransit service. With ten dedicated vehicles and four non-dedicated taxis, this updated network covers a 54-square-mile area, including both dense and lightly-populated neighborhoods. Notably, the city has also gone beyond the ADA-required service zone, which is 3/4 of a mile on either side of a fixed route service. It now provides full coverage to all origins and destinations inside the city limits, tailored to the unique needs of the local paratransit-eligible community.

In less than two months since launching, the transit agency has demonstrated immediate efficiency gains — it reaches an average utilization rate of 2.2, carrying 460 paratransit riders on average per week, and a 50% reduction in the number of overflow trips dispatched to third parties.

Paratransit’s need for a revolution.

As more cities rethink their public transportation operations in light of the COVID-19 pandemic, the future of paratransit is also hanging in the balance. Cities are already embracing on-demand technology to optimize fixed-route bus networks, meaning it’s time to turn to similar technology to update paratransit.

With on-demand technology, cities and transit agencies can give seniors and individuals with disabilities a new sense of independence — as well as increase the potential for more efficient operations and lower costs for agencies, cities, and taxpayers. While the days of old-school paratransit may swiftly be coming to an end, transit leaders in Wisconsin, Virginia, and Texas prove that the future is bright.

Jun 10, 2021
The eight prominent organizations are joining together to encourage the federal government to accelerate the transition to technology-powered, responsive transit.
Thought leadership

Cities ready to modernize paratransit may have a new solution

Jun 23, 2020   •   9 min read
Outdated paratransit services are notoriously unpredictable for riders and transportation agencies alike, but some cities are turning to new technologies to find a fix at long last.