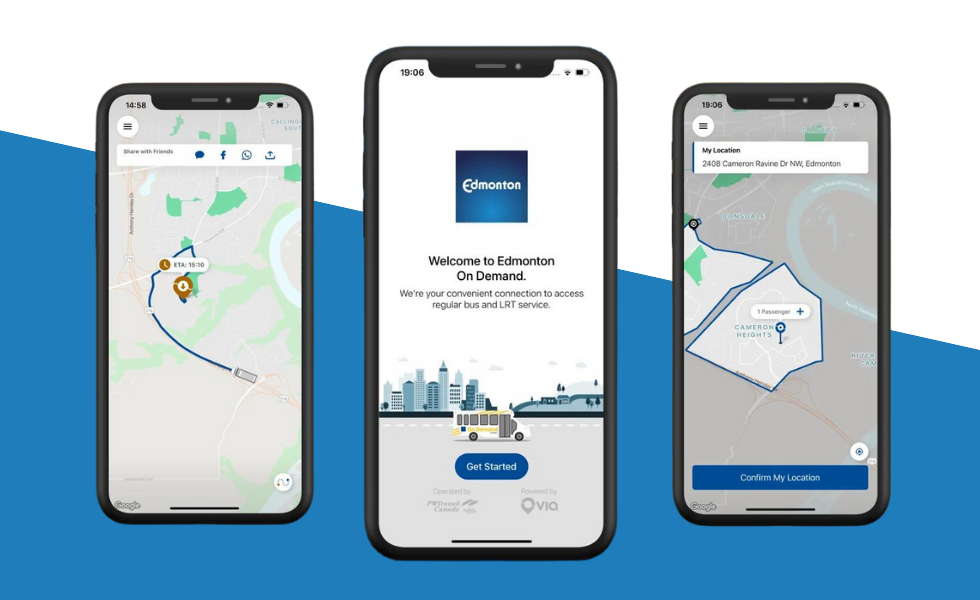 Edmonton On Demand, Canada’s largest microtransit deployment, shows how demand-responsive services can be hyper-targeted to particular neighborhoods without transit to complement the larger fixed-route network.

In 2021, the City of Edmonton overhauled its bus network for the first time since 1997, bringing more frequent service to heavily-trafficked corridors, rerouting local bus routes, and introducing Edmonton On Demand to bridge transit gaps in lower-density areas. The City, working with Via and Calgary-based operator Pacific Western Transit, introduced on-demand transit in 30 communities and 18 large senior residences, offering more convenient connections to high-frequency routes as well as accessible transit to local destinations.

Edmonton On Demand has experienced steady growth since launch in April 2021, with daily ridership peaking at ~1,400 nearly a year later. On-demand trips are most concentrated in several neighbourhoods, including Westridge — Rio Terrace- Quesnell Heights, Edgemont, and Big Lake — Northwest Industrial. Riders can expect a trip within 30 minutes of their request — often much faster — and spend an average of just 12 minutes in the vehicle on the way to their destinations.

Rider ratings are also strong, averaging 4.8 / 5 stars. As community needs have continued to fluctuate, in part due to the City’s ongoing COVID-19 pandemic response, the City has continued to tweak its transit offerings. On the strength of Edmonton On Demand’s results, and in response to passenger input, the City is exploring plans to expand demand-responsive service to additional neighbourhoods requiring additional transit support.

On Demand Transit will provide another layer of service in Edmonton’s integrated transit network so everyone has a safe and convenient way to access their city.”

This is some text inside of a div block.
Edmonton Transit Service